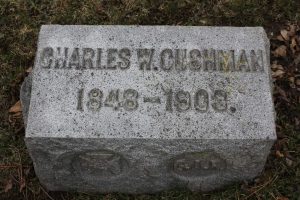 Charles was born in Illinois in 1848, and enlisted in the Union Army in Rockford, Illinois on May 8, 1864. He served in Company E, 141st Illinois Infantry, mustered out of service 6 months later in Chicago on October 10, 1864.

Charles reenlisted in Company A of the 147th Illinois Infantry as a private on February 7, 1865 serving until Jan 20, 1866, mustering out in Savannah, GA. After returning home after the civil war, Charles was a very successful businessman. He was head of several successful corporations.

Charles came to Buffalo in the 1890’s with his wife Georgie and his son William. He was very involved in Free Masonry throughout his life becoming Grand Master of New York State at the turn of the century.

Brother Charles passed into the light on August 19, 1903 making a impact in his community, work and in free masonry.

Charles is buried at Forest Lawn Cemetery in Buffalo, along with his wife Georgie and son William (who was a honorary member of our Charles W Cushman Lodge 879)

More on Charles W Cushman’s accomplishments in the future.